September 20, 2005 — For the first time, SLM 70 — — a management-controlled trade union within Chemplast Sanmar’s PVC plant in Mettur — admitted at an environmental awareness meeting organised by them that Chemplast’s chemical factories had caused widespread damage. Union representatives Mr. Mayilsamy and Mr. Ethiraj acknowledged that pollution from the factory had affected agricultural fields, groundwater and people’s health. They said they supported villagers’ claim for compensation, and urged the Company, the Government and the court to address the matter. However, they claimed that over the last decade things had improved considerably, and that the company now operated a zero-discharge plant. Indeed, this is the first admission of guilt since 1966, when a local revenue official had ordered the company to pay compensation to farmers for contaminating their wells, and to take remedial measures to clean the same. 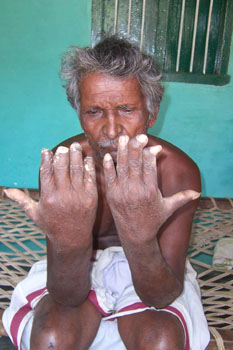 This worker spent several years collecting mercury spills from Chemplast’s chloralkali plant with bare hands. According to the worker, the cellhouse where he worked had a suffocating smell of chlorine and caustic lye, and mercury was all over the plant.

Interestingly, members of West Konur Farmers Welfare Association were intimidated by Mettur police today when they sought to attend the environmental awareness meeting . In an earlier meeting organised by Chemplast’s chlorochemicals factory trade union, the Farmers Association had challenged claims by trade union leaders that Chemplast had caused no pollution to the environment or harm to workers by pointing out that more than 5000 acres had been rendered infertile, and frequent toxic gas leaks — such as the leak of July 18, 2004 — continue to threaten workers and residents. The public meeting is the second such gathering organised in the last month, and is seen to be a response to the high-profiling of the environmental and health problems caused by Chemplast’s chemical factories in Mettur.

According to the Farmers Association, the trade unions are completely under the control of the company, and fail to represent the numerous workers who work under hazardous conditions and are subject to occupational illnesses. “They are the handmaidens of the company, and serve the purpose of a mouthpiece for the company,” the Farmers said. Rather than represent workers who have been injured due to occupational exposure to chemicals, Chemplast-controlled trade unions have routinely dismissed claims that workers have been hurt, the farmers said.

On 20 September, 2005, local intelligence official Mr. Madheswaran (CB-CID) tried to prevent Mr. A.S. Mani and other members of the Farmers Association from attending the meeting. The farmers were warned that the Deputy Superintendent of Police had instructed that the farmers were to be removed to the police station if they attempted to attend the awareness meeting. Mani reports that the Inspector of the nearby Karumalaikoodal police station said that “Only those who will shut up and listen are allowed to attend the meeting.” Speaking from the podium before the event began, the Inspector Mr. Krishnamoorthy reportedly said “If anybody raises questions [about the company’s pollution] during the meeting, I’ll throw him in the locker. If you want to do that, do it elsewhere. Set up a stage on the street and do that.”

Earlier this month, the Mettur police had refused permission to local farmers to set off on a 285-km march from Mettur to Cuddalore to highlight the pollution caused by Chemplast, and warn Cuddalore residents about the dangers in store for them if they allowed a proposed PVC factory to set up in their neighborhood. The Police reasoned that the march by 50 farmers — including women, and elderly farmers — presented a law and order problem, and that the farmers were anti-labour. The police have also said that protests against the State or targeting single companies would not be allowed. In similar developments in other parts of the state, the Police have prevented villagers and public interest organisations from publicly protesting against a controversial Coca Cola bottling company that is coming up despite local resistance in Gangaikondan, Tirunelveli.

Chennai-based supporters of the Mettur farmers have taken the Police to court, and have resolved that they will continue to conduct activities to highlight Chemplast’s pollution, and seek remedy. Contrary to claims by SLM 70 union representatives that the company did not discharge any pollutants, the Farmers Association highlighted the fact that an air sample taken above the PVC factory’s effluent outfall into the River Kaveri revealed the presence of high levels of cancer-causing chemicals like chloroform, vinyl chloride and ethylene dichlorie — some of which were 32000 times higher than safe levels. 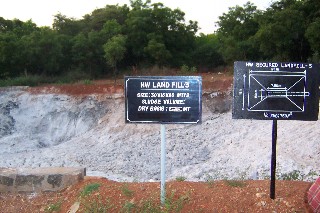 Chemplast’s mercury brine sludge is buried in 90 pits like these on the Western side of the campus.

A July 2005 report by the Indian People’s Tribunal on Environment and Human Rights observes that “Chemplast disposed extremely hazardous wastes in open unlined pits within its premises. About 90 pits of varying sizes containing “immobilised mercury-bearing brine sludge” dot the Western side of the company.” Years worth of tarry wastes arising from PVC production processes have also been reportedly buried in 12 wells within the factory.

The Tribunal report records a testimony by Mr. A. Mani, a farmer from nearby Konur panchayat: “All this dumping is the reason why, on the North side, groundwater upto 15 km wil be damaged. Already, the pollution has moved to 10 km. Within the first kilometre, the damage to wells is 100 percent. The water smells of carbon tetrachloride, alcohol. It has a strong smell, and if you use it, the skin itches and hair falls and you’ll have dental problems, yellow teeth. Even cattle will not drink this water. We can’t even use it for toilet purposes.”