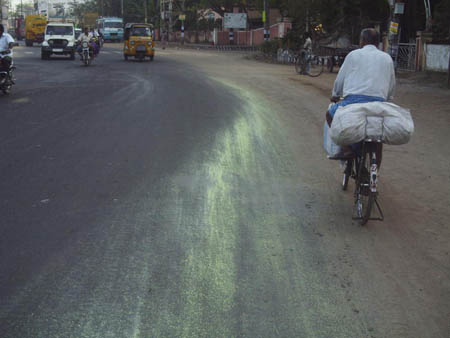 Cuddalore 21 March 2010: Residents of Cuddalore New Town noticed yellow colour powder deposits on the sides of the road near the Cuddalore town hall at about 6.45 am today. According to the sources, the powder had a strong sulphur odour to it and was found spilled on the road side for about half a kilometer up till the Anna Bridge on the East Coast Road Cuddalore. Local residents informed the TNPCB authorities about the spill immediately and were assured an immediate clean up of the site. 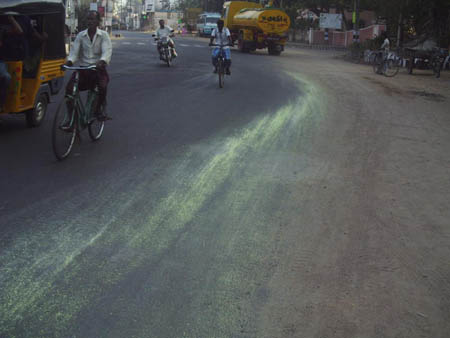 Residents suspect that the chemical belonged to one of the units in SIPCOT Cuddalore and had spilled during the transportation in the night.This is not the first time such a spill has been reported from the Cuddalore town area, in the past several similar spills have been reported and documented. Today’s incident once again shows the negligent manner of the industrial units in transporting toxic chemicals that could potentially pose a threat to a larger population. While the site of the spill has now been cleaned up, the Board officials have still not given any details of the nature and source of the chemical. A complaint has been sent to the Board and District Administration. 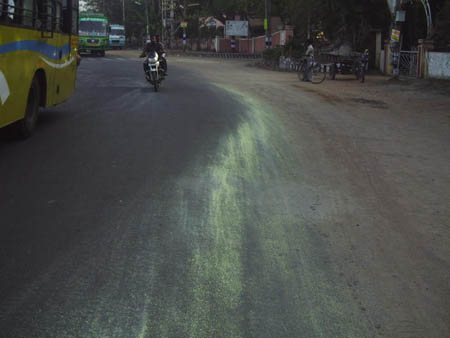