Cuddalore, 22 November 2006: A massive explosion at Loyal Super Fabrics rocked the SIPCOT Industrial estate at around 12 noon today. The explosion took place at a newly set-up oil boiler of the unit and was followed by a fire that ravaged sections of the unit. According to SACEM, whose monitors arrived on the scene immediately, the fire was difficult to control. It took 8 fire fighting vehicles more than 2 hours to bring the fire under control. Officials of the TNPCB were present at the spot, but no representative from the Factories Inspectorate visited the site.

Residents of Kudikadu village, the community worst affected by Loyal, and representatives of Pattali Makkal Katchi, a political party, blocked the road outside the unit in the afternoon demanding immediate closure of the unit.

A September 2006 public hearing report observed that local youth and residents were very agitated about the pollution caused by the factory, and the inability of the TNPCB to rein in the pollution. Like many other factories in Tamilnadu, Loyal too has no valid Consent to operate. Loyal’s consent expired in 1998, and has not been renewed since.

Pursuant to community pressure, Loyal came under the TNPCB’s scanner and was shut down in the month of July for not following the Consent conditions. The unit was eventually reopened conditionally for two months in August 2006 and the later its operations were extended till 10 December 2006.

Numerous reports of pollution from this unit and other factories in SIPCOT have been systematically ignored by the government. Rather than curb pollution, the Government is approving more and more polluting factories to come up in residential and agricultural areas in Cuddalore.

The Loyal explosion comes at an ominous time, less than 10 days before the 22nd anniversary of the Union Carbide gas disaster in Bhopal. 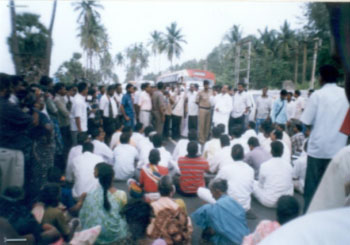