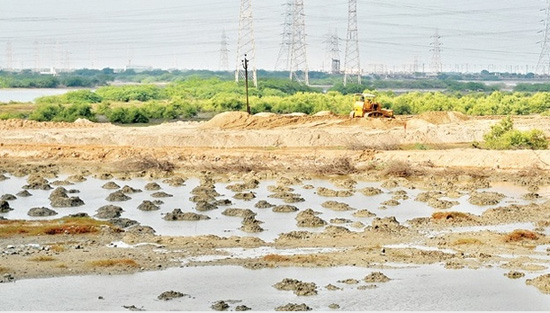 CHENNAI: The battle between the Ennore Port and environmental activists, supported by villagers from several surrounding hamlets, intensified on Wednesday after a group of nearly 200 villagers from two hamlets descended with their boats on two dumping sites, bringing work to a halt. One of the two sites is barely 100 metres away from the piece of land which played host to the first ‘battle’ between the Port and activists over the issue in November.

As many as 70 boats and 200 fishermen from Mugathuvaarkuppam and Kattukuppam came to the two sites along the banks of the Kosasthalaiyar river around 10 am, demanding that the workers put down their tools, shut off their dozer engines and stop all work.

“These people are filling up parts of the river that are the direct source of our livelihood,” accused A Venkatesh, a leader of the Mugathuvaarkuppam Gramam association. “These mangroves are the places where prawns, and even crabs, spawn. If they fill these up, it’s going to affect a large portion of our income,” he accused. The majority of the 1,500 families from both villages depend on fishing as their primary source of income  prawns and crabs being the main catch.

Their accusation against the Ennore Port is that the dumping of dredged sand being done along the banks of the Kosasthalaiyar at Ennore Creek is illegal. The documents being highlighted for proof are the Environment Clearance issued by the Ministry of Environment, Forest and Climate Change, giving the nod for the development of coal berths 3 and 4 and the dredging for the same. The same documents, they point out, were contained in the Port’s response given to them when objections to the project were first raised.

“The EC has been given on the condition that the Port complies with the conditions set by the Tamil Nadu Coastal Zone Management Authority. The TNCZMA is very clear in that the dredged sand should only be dumped northward of the Port and not on the inter-tidal zone and salt pan areas. These sites are both southward and in salt pan areas,” said K Saravanan of the Coastal Resource Centre.

The allegations are vehemently contested by the Port. Kamarajar Port chairman and managing director M A Bhaskarachar said the Port has fully complied with the laws and regulations that have been set for the project. “There is no encroachment on inter-tidal zones and the land that is being reclaimed falls under classifications that can be reclaimed upon. We have taken strong measures to protect the inter-tidal zone by building a bund,” he said. According to the Port, of the original 640 acres bought for the reclamation project from the Salt Department, 120 acres have been left untouched because they could endanger the environment.

Illegal or otherwise, villagers in both hamlets say they will be seriously affected if the reclamation goes through. “We catch nearly 200 kg of prawns on a good day during the rainy season. Even on a bad day, the catch is 40 kg per boat. The primary breeding grounds of prawns are in these mangroves and if they are reclaimed, our catch will take a serious hit,” said Venkatesh.

While the work was forced to halt on Wednesday, it was only temporary, said an employee of the contractor. The hamlets are not willing to give up however. According to Venkatesh, a larger consortium with representatives of a total of six villages are being put together to contest the reclamation. And the Port’s response? “We can only maintain that we are doing nothing illegal and are willing to speak to anyone who wishes to. We have the maps and have consulted experts who have assured us that we are safe,” asserted Bhaskarachar.

On November 27, a group of activists had raised serious objection claiming that the reclamation project by the Ennore Port was illegal and contrary to regulations. It had resulted in the Port authorities suspending work on one site until they could be addressed properly.

Locals on Warpath as Ennore Port Dumps Sand on the Sly