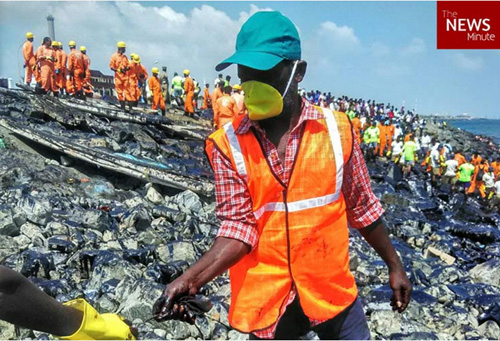 Photo: Pheba Mathew
Eye-irritation and respiratory symptoms were some of the immediate effects reported following the oil-spill

Three weeks after the massive oil spill cause by the collision of two ships near Kamarajar Port, a team of medical doctors have warned that those who helped clean the toxic sludge may suffer from serious health problems.

A fact-finding team, which included three doctors, met more than 50 people, who helped in the clean-up operations on February 7, 2017. “We came to know that many volunteers were participating in the oil clean-up process so we wanted to find out if there were appropriate steps taken for the safety of the volunteers,” said Dr Shruthee SG, a member of the fact-finding team.

“The clean-up workers and the fishermen reported increased acute toxic systems primarily that of eye-irritation and respiratory symptoms like throat irritation chest tightness and cough, mainly on the first two days after the oil spill,” said Dr Shruthee.

In the long-term, she warned that the chemicals in the oil could lead to cancer. “The most commonly occurring chemicals in the oil include Benzene, Toluene and Xylene (BTX). BTX are carcinogenic in human beings. Benzene is known to cause leukemia in humans, toluene can cause kidney and liver damage, and exposure to Xylene can lead to visual blurring, tremors, heart beat irregularities, paralysis,” observed Dr Amaran M, another member of the fact-finding team.

Their interactions with the clean-up workers revealed that the fishermen and other volunteers were unaware of the potential consequences of the chemicals in the oil. During their visit, they found a health camp about 200 metres away from the spot where oil had spilled. “An Amma canteen was converted to a health camp. There were limited medicines in the camp and the health workers had very poor understanding of the effects likely to arise out of exposure to chemicals during an oil spill clean-up. However, they claimed that two doctors came from government hospitals to the health camp,” said Dr Shruthee.

She added that there is no estimate on the health effects on people who were involved in the early stages of the clean-up when exposure to the volatile chemicals was maximum.

Highlighting one of the major lapses in the clean-up, the fact-finding team pointed out that proper protective equipment was not provided to the workers. “In Ennore, we found that rubber gloves and boots were the only protective equipment that was used by the workers. Since some workers wore short sleeves or shorts, the gloves and boots were not sufficient to prevent exposure to skin. Some workers also wore surgical masks and few others wore handkerchiefs around their nose and mouth,” stated the report.

“Only a small section of the workers (from the Coastal Guard) were provided with full coveralls. Lack of proper equipment would result in the workers carrying hazardous chemicals from the site to their own homes and exposing their families to the toxin,” the report states.

While the clean-up ops may be complete, Dr Shruthee says it’s crucial that the government follow up on the health of the workers. “A regular check-up needs to be carried out for the next one year on the workers who were exposed to the oil. There also needs to be a long-term health monitoring system to detect the onset of new symptoms and trace the effects of these chemicals,” she adds.

Meanwhile, the Indian Coast Guard had requested IIT Madras to conduct a study on the effects of the spill. Having collected water samples to analyse the pollutants, Indumathi M Nambi, Associate Professor, Department of Environmental and Water Resources Engineering Division in IIT said, “It is too early to say that one will have health issues. If one is exposed to the oil, one can have health issues but it depends on what they were exposed to, probably they were inhaling organic compound, it is the matter of probability as to how long one was exposed to and what was the concentration. Unless one has that data, you cannot tell what is the risk. We have to come with a long-term study and monitor the people who were exposed to the oil.”