The emphasis of the program is to enable families to increase their income, even while creating opportunities for women to self-organise on livelihood and rights issues such as against pollution. Livelihood skills are sought to be promoted for occupations or vocations that utilise natural or replenishable resources, and allows women and youth to work close to their homes to produce items that do not pollute the environment or threaten the health of the producers or consumers. More importantly, the product, material, production process and the form of business organising also seek to reinforce our stance against pollution, corporatisation and encourage communal ownership and group work. The training programs also strive to provide opportunities for people from different communities to interact across caste lines. 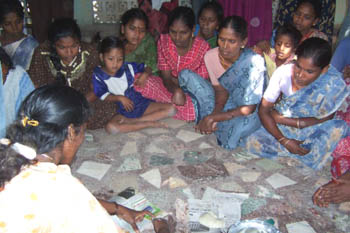 Sonanchavadi women learning the basics of paper-bag making from Chandralekha

Our five resource persons — an all-women team consisting of Sheela, Sulekha, Chandralekha, Medha and Usha — from Kerala work with the Zero Waste Centre and Thanal in Kerala (www.thanal.org). Sheela underwent is a coconut shell product trainer. Sulekha works with tailoring waste. Chandralekha is with the Pioneer Paper Unit — a women-owned entrepreneurship from Kerala — and provides training on paper-product manufacturing. Medha is an National Institute of Design alumni who initiated training for Kovalam women on converting tailoring wastes to useful products. Usha is an agricultural expert who, among other things, is working to promote small farming using natural methods as a livelihood option for poor women. 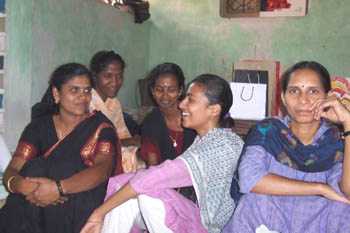 Monday’s program was in Sonanchavadi. This once-beautiful fishing village on the banks of the River Uppanar is one of the poorer hamlets in SIPCOT. A majority of the population here is from the inland fishing community. Levels of hygiene in the village are pretty poor as is the general health. Women say they have a lot of time on their hands, but no money or skills to make money.

The day-long orientation program was attended by between 25 and 30 women, one man and several infants and toddlers. Coconut shell, cloth waste and paper products were displayed and talked about, and basic training on paper bag manufacturing was given. The training clearly caught the fancy of the women who learnt the simple paper-bag making skills in no time. Our objective was to get them to think about local resources and about what they could do to either reduce their expenses or increase their income, or, even better, do both. Equally importantly is the objective to have them provide for themselves a clean workspace — a sanctuary of sorts from the chemical pollution that assails them on a daily basis. 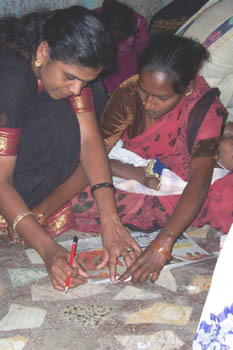 Sheela from Zero Waste Centre helping a Sonanchavadi woman with her paper bag.

Late evening, the trainers team visited Eachangadu — the smelliest place in SIPCOT. This is a one-caste hamlet, where all households belong to the farming community of Vanniyars. The training session for this village is divided in two-hour packets over three days. According to Shweta, the response here was very enthusiastic, and Medha and the other trainers felt that the women from this village are very street smart and capable of doing things successfully. In keeping with their background, women here were piqued by the prospects of small farming.

On 8 February, 2005, the day training began in Semmankuppam. The response here was less than expected — about 15 people. Local women attribute it to the fact that today’s Amavasya (New Moon day), and most women were engaged in preparing for the evening’s festivities. Also, because it is harvest season, many women were unable to make it. Like in Eachangadu, there is much interest in small farming among the women, most of whom are agricultural workers. Presentations on chemicals, pesticides and women’s bodies sparked off interesting discussions both in Semmankuppam and Eachangadu. 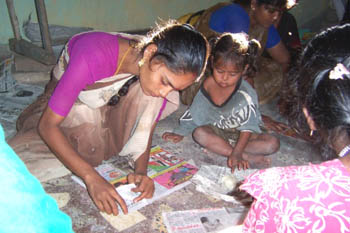 Woman working on her paper bag as her child looks on.