Cuddalore: On 3rd June 2021 during pollution patrol in SIPCOT Cuddalore, the SIPCOT Area Community environmental monitors observed a storm water drainage canal to be contaminated. On immediately reporting it to the District Environmental Engineer(DEE) and Project officer of SIPCOT Cuddalore, action was taken the next day to clean the canal.

In the SIPCOT Cddalore area, storm water drainage canals run along the sides of the SIPCOT service roads. The said contaminated drain runs along both sides of the ECR to Raspettai approach road, having Vivin Tex, a textile processing industry on one of its sides . The monitors report that the drainage canal was stagnant and appeared in black and in some places red mud colour. They added that it smelled of oily odour and in some places with Chemical odour. The SACEM monitors reported it to the DEE, Project officer of SIPCOT Cuddalore through whatsapp immediately. 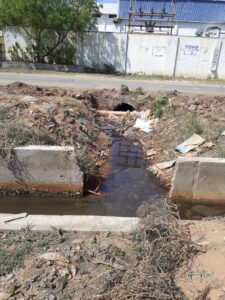 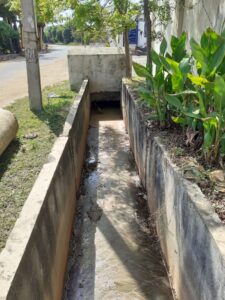 On the next day, action was taken to clean the drainage canal by men with safety gears and clothing as seen in the picture below. 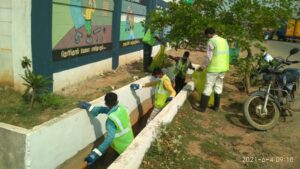 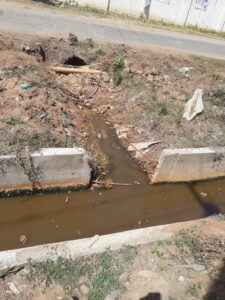 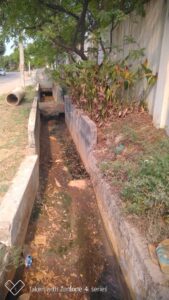 The SACEM members said, ”Community reporting was heard this time by the concerned authorities and corrective measures being taken is a positive sign. However, the cause of the contamination is unknown and should be audited to check if any illegal effluent discharge occurs. In that case, it should be arrested at the source and measures are to be taken to prevent recurring contamination.” They also demanded steps to reconstruct the broken parts of the drain and incorporate designs to make sure that water flows away smoothly.