Cuddalore, 1 August 2006: Construction of an illegal building at Pioneer Miyagi Chemicals continued even after Cuddalore District Collector’s directions on 29 July 2006 to the Tamilnadu Pollution Control Board to stop the construction. As of today, SACEM reported that the construction work was still ongoing and that no action had been taken by the TNPCB. After phone calls to TNPCB district officials failed to evoke a response, SACEM sent a detailed letter and others sent a telegram to the District Collector and TNPCB Chairman requesting their immediate intervention. Factories engaging in new construction, upgradation or expansion are required to secure a “Consent to Establish” from the Tamilnadu Pollution Control Board and clearance from the Inspector of Factories before commencing construction. Several Supreme Court orders have underlined the importance of the process and have declared post-facto clearances clearances given after the construction is complete as illegal. 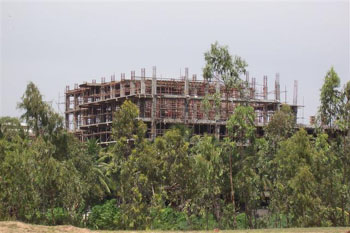 Five floors constructed without Consent to Establish at Pioneer.

The matter was first brought to the notice of the TNPCB on 28 May 2006, when an accident at the illegal construction site seriously injured a worker. The then District Environment Engineer (DEE) Mr. Karthikeyan informed SACEM members that the unit was illegal as it did not have a Consent to Establish. According to him, an application made by the company for setting up the factory was still pending with the TNPCB. He said that the company had been specifically warned not to engage in construction. After less than a month’s inactivity, construction of the unauthorized building resumed in the second week of July.

On 29 July, SACEM noticed and informed the Assistant Environment Engineer (AEE) of TNPCB as the Joint Chief Environmental Engineer’s phone was switched off. The AEE said he was powerless to do anything about it since the construction was proceeding with the knowledge and support of higher-ups. SACEM then brought the matter to the notice of the District Collector of Cuddalore who ordered the TNPCB to immediately investigate the allegations and suspend work at the new unit. However, TNPCB failed to execute this order.

According to documents obtained through Right to Information Act by SACEM, three show-cause notices had been issued by local TNPCB officials to Pioneer Miyagi, with copies to the Member Secretary of the TNPCB. Despite this, no action had been taken. Local officials have said that the power to act on such matters lies only with the Chennai office, and that the construction was proceeding with their full knowledge.

This is not the first instance where the TNPCB has condoned illegal construction, expansion and production. Tagros Chemicals, a pesticide manufacturer identified as one of the most dangerous units in SIPCOT, has openly and despite warnings illegally expanded production in 2002. The matter was brought to the notice of the TNPCB in August 2004. Ignoring the allegations, TNPCB held a post-facto public hearing for the expansion. Following the intervention of the SCMC, a Consent to Establish was withheld. However, because of its political connections the company managed to get a Consent to Operate a factory that was never authorized to be constructed in the first place. For public appearances, the factory was closed for a month in March 2006.